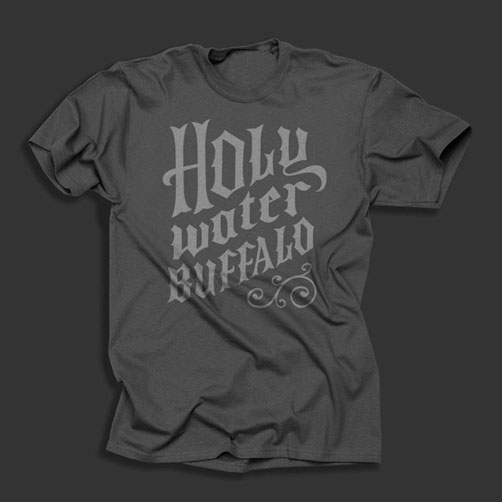 Holy Water Buffalo hails from Heber, UT, and is deeply rooted in the heavy, blues-soaked riffs reminiscent of bands like Jeff Beck Group, Black Sabbath, & Blue Cheer. I first caught a glimpse of them performing at the Corner Store in Park City, and have had my eyes and ears on them ever since. So I thought I’d put some letters to good use, and draw up a t-shirt for the band.

Step 1: I knew I wanted to reference Holy Water Buffalo’s psychedelic tendencies as well as create something that looked hard and heavy; maybe explore some black-letter elements, but a bit more free-formed. I broke open a crisp new Field Notes and got to sketching. Once I was satisfied with my pencil sketch (Figure 1), I went ahead and outlined it in ink, erased all the stray pencil marks, and scanned it in at 300dpi. 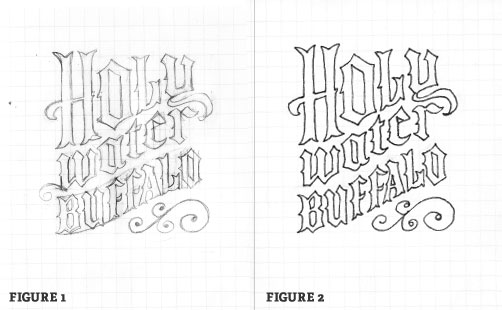 Step 2: Now that I have the scanned file on my computer, I open it up in photoshop and adjust levels, brightness, and contrast, to where I only have solid blacks and whites. I then knock out all the white leaving me with the just the darkened outline, and apply a light blue color overlay (Figure 3). This allows me to print it and touch up areas by hand that still need some work. 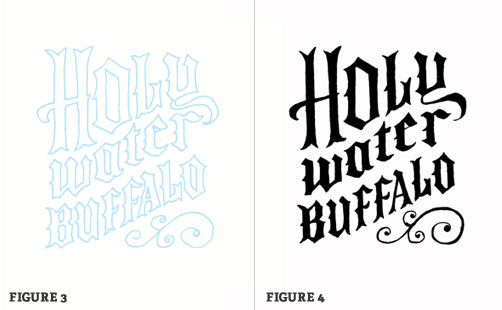 Step 3: After inking up my printout (Figure 4), I rescan and open up again in photoshop repeating Step 2 until I am satisfied. The latest version then gets opened with illustrator and I either trace by hand, or use live trace to create a vector of the image. Occasionally I can get good results by tweaking the Live Trace Options, but more often than not I end up tracing manually.